3 simple messages from MLK that apply to the workplace

Today many of us take a day off from work to reflect on the accomplishments of Martin Luther King, Jr. As I was thinking of him this morning, three thoughts came to mind that I think are relevant to the workplace. They are related to dignity, excellence, and greatness.

My first thought was about a famous picture taken in 1964 of MLK with Fr. Theodore Hesburgh, then President of Notre Dame. The picture, called The Picture of Purpose, shows the two arm in arm at a rally in Soldier Field. Fr. Hesburgh told the crowd of 55,000, “We want to strive for dignity with you.” He linked arms with Mr. King to sing the movement’s anthem, “We Shall Overcome.”


No one should have to strive for dignity. But, if someone does, do you strive with them? Back in 1964, they were striving for what most today would consider basic rights. But, today, people are treated without dignity in the workplace sometimes.


When a coworker is gossiping about someone, do you chime in? Sit silently? Or do you speak up on behalf of the absent person? Speaking in a disparaging manner is not treating someone with dignity.


Think about how you treat people who make mistakes. Do you teach them and rebuild their confidence, or do you hold a grudge never to trust them again? Holding a grudge is not treating them with dignity.


Those are just a few examples that hit home to me today. I wonder if we could all treat others with a little more dignity and respect.


Excellence
The other thought I had this morning was about Mr. King’s famous street sweeper speech.


Sometimes people get impatient with the pace of their promotions. They want the fancy office and title because they think their current ones are not impressive enough. I understand the impact of titles externally; however, they should have nothing at all to do with one’s self-esteem. Be the best street sweeper, chemist, technician, waiter, writer, manager, accountant, or data entry person because that is who you are, not because someone else labeled you as the best. Excellence comes from within.


As for the pace of promotions, it is often sped up when consistent excellence combines with a positive attitude over time. A street sweeper who did well for a few months but now complains all the time about how messy the job is earns a reputation for misery, not excellence.


Greatness
Mr. King said, “Everybody can be great.” Isn’t that remarkable? Every single person can be great. Really? You don’t have to be highly educated, wealthy, or famous to be great.


On days when you doubt your ability to achieve greatness remember what Mr. King said:


“Life's most persistent and urgent question is, 'What are you doing for others?' Everybody can be great because anybody can serve. You don't have to have a college degree to serve. You only need a heart full of grace. A soul generated by love. Greatness is determined by service."
Martin Luther King, Jr.


Greatness is not determined by education, title, wealth, or fame. It is attainable by everyone who serves others. The thought can get lost in the midst of our celebrity-centric culture. Charlie Rose called one of the infamous celebutants “the most frivolous person on the planet.” Let’s serve others, and admire those who do the same, so we do not earn a similar moniker.


Three of Martin Luther King, Jr.’s messages remain relevant today in areas beyond what he was fighting for: Treat others with dignity, perform excellently, and achieve greatness through service. Seems simple enough.

Posted by Kelly Tyler Byrnes at 3:23 PM No comments:

Make this the year you stay off the treadmill

Happy New Year!
It is fitting that the first month of the year is named after Janus, the god of transitions and beginnings. Janus is often represented with two faces: one facing to the left, looking back on the past, and one facing right, looking to the future. As a new year begins, most people reflect on the previous year and set goals for the new one. 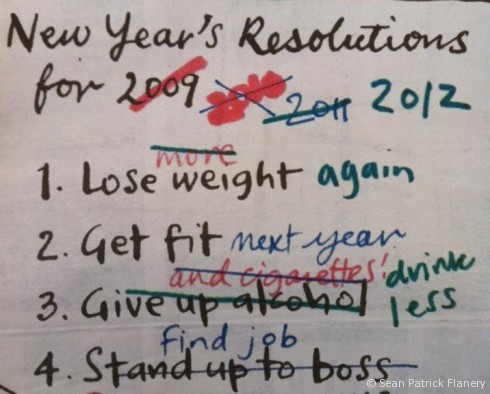 According to the University of Scranton’s Journal of Clinical Psychology, 62% of Americans set annual resolutions. Their research says 64% of those keep their resolutions past the first month of the year. Yet, by the end of the year, only 8% of those who set new resolutions accomplish them.

There seems to be an awful lot of time spent on setting goals that aren’t kept. If you’re one of the 82% of people who don’t set or keep their annual resolutions, how about employing a novel approach to setting goals this year: don’t do it!

In 2006 I met a consultant who shocked my socks off with his philosophy of goal-free living. Stephen Shapiro, whose book, Goal-Free Living, was published that year, said he had achieved more in his life by living without goals than when he was obsessed with setting goals.

I nearly hyperventilated at the thought of a life without goals. After all, how would you know if you accomplished anything? I was the aunt in the stands keeping score while five-year olds played basketball without a scoreboard. The thought that you wouldn’t keep score in a game, much less in life, was stunning to me and I was skeptical of Stephen.

As Stephen explained his philosophy further, and I read his book, goal-free living made sense. He told me about his constant struggle to achieve and how it distracted him from his daily life. Stephen referred to it as constantly being on a treadmill. After a while, you’d get bored on a treadmill and not work hard enough to get anything out of it. So, he stays off the treadmill of goal setting by using the following eight tips (copied from the book):
If you are tired of the goal-setting treadmill and discouraged at the thought of another resolution failure, use Stephen Shapiro’s philosophy of goal-free living and stay off the goal setting treadmill for 2014. It turns out, success can happen without keeping score the old-fashioned way.

Link to Stephen Shapiro’s book on amazon:
Goal-Free Living: How to Have the Life You Want NOW!
http://www.amazon.com/Goal-Free-Living-Have-Life-Want/dp/0471772801

Quote du jour:
Always bear in mind that your own resolution to succeed
is more important than any other.
Abraham Lincoln